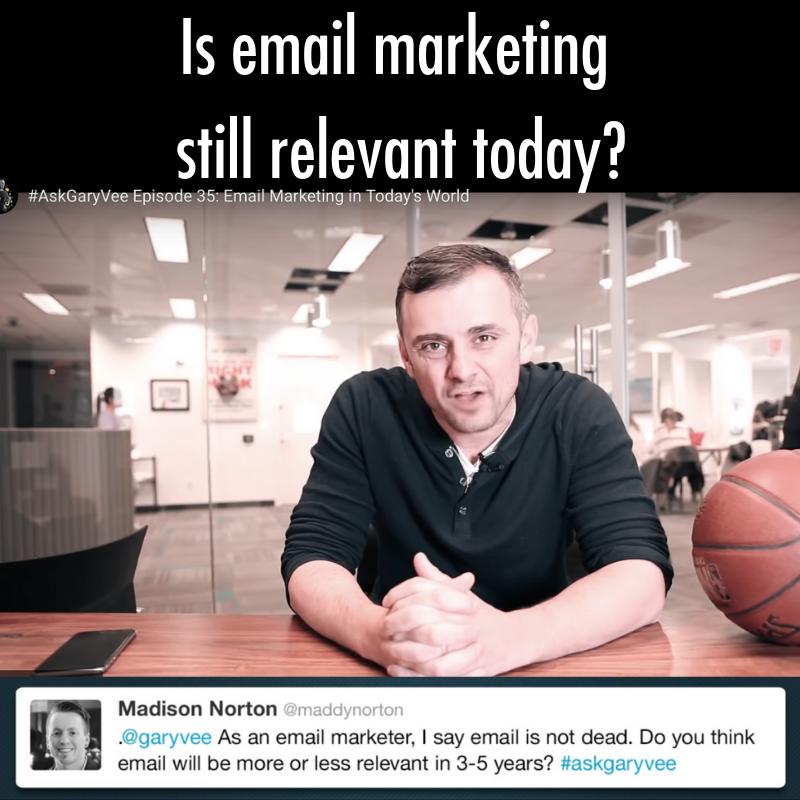 Do you think email will be more or less relevant in three to five years?”

Madison Norton:     Madison asks, “As an email marketer, I say email is not dead. Do you think email will be more or less relevant in three to five years?”

I’ve included the word for word transcription below of the Garys response to the email relevant portion only.

Gary Vaynerchuk:    Madison, great question. Three to five years. It’s always hard to predict that way out, but I’ll get to that part, and before I actually answer this question, just want to give a huge shout out to the Vayner Nation for supporting this show. I’m really enjoying it. I was super bummed about Friday night, so I apologize. I think I tweeted that I was going to have it, and let some people down. I hate letting people down.

Gary Vaynerchuk:    Email is definitely not dead. I would say that email, right now, I like marketing in the year that we live in, so I would say right now that email is a very killer app. Now are open rates at 90% like I had in 1997? Absolutely not, but is it your own channel that you control and don’t have to be at the mercy of all these other platforms that you can market to your people? For sure.

Gary Vaynerchuk:    I think we can’t be naïve to the fact that Google made changes with Gmail about a year ago, it feels like now, or within the year, where we went to a promotions tab. I see Stunwin shaking his head. Steve, were you affected by the promotions tab? Were you part of any email lists that you noticed went there?

So, at the risk of sounding like Captain Obvious, I’d say that email and email marketing is much more valuable today.

Gary Vaynerchuk:    It will still be very valuable because it’s one of the best channels, but it will be less valuable. That whole ‘marketers ruin everything’ line that I use a lot, that’s what this is all about. Platforms come along, they have value, and then we market against them, and then consumers kind of push off.

Gary Vaynerchuk:    It’s cops and robbers, it’s cat and mouse, over and over and over again, and we’re living in a process now that we’re into the second decade of email being ruined by marketers.

This is part two of a three part email marketing series with Gary Vaynerchuk as the super star.

Make sure you join me every Monday to receive “real executable marketing tactics, techniques, technology, and tips delivered directly to your email inbox”

He works as a Media Buyer, he has helped venture capital and investment banker clients raise in excess of $100 million dollars in the USA.  He does this by leveraging email marketing, renting/sponsoring third-party permission-based email lists, online PPC advertising, and paid influencer marketing.

This made him one of the nation’s largest media buyers of sponsored email and rented email lists.

In his spare time, you can find him in the CrossFit box, Olympic weightlifting, and chasing his grandsons around.

You can get more information about his best selling book.